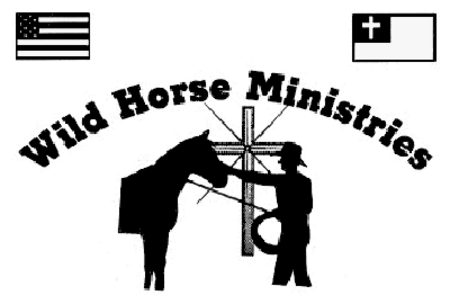 As for me and my horse, we will ride for the Lord !

The first demonstration or service held by the Wild Horse Ministries was on February 22, 1997 at the Daily home near Jena, LA. This demonstration was presented to a Sunday School class taught by Joana Daily. Initially the ministry was restricted to this location or others that had a "round pen". But soon, the Lord provided and now the only things needed by the Wild Horse Ministries are praying sponsors, an area large enough for the "round pen" and an untrained 2 to 3 year old halter or rope broke horse. Paul Daily, father of two, is the founder of Wild Horse Ministries and is the horse trainer. Because of the techniques employed in the training he is sometimes called a "horse whisperer". He describes himself as an "ole country boy" and "oil field worker". Paul has loved and worked with horses all his life. Before the ministry started he worked in the oil fields "for his bread money" and trained horses on his days off. Early in 1997 Paul was in the "round pen" working with a horse when the Lord inspired or called him to take the lessons the horse was learning in the "round pen" experience and relate it to man's life lessons with Jesus Christ. See "Round Pen of Life".. Thus was born the ministry.

During the first three years demonstrations were given before almost 15,000 people in Louisiana and Texas. This non-denominational ministry was taken to churches, fairs, prisons and "anywhere we're invited". During these first years Paul was able to do this work around his full-time job. When the company changed their vacation policy, disallowing one-day vacations or three-day weekends, Paul felt that it was the Lord leading him into full-time service. So, in May of 2000 Paul became a full-time horse trainer for the Lord.

The first trip out of what might be considered the home area was on April 1, 2000 when Paul and wife Joana went to Rapid City, SD. There, a demonstration was provided for a multi-state pastor conference of more than 600. In June 2000 Paul and the ministry team returned to the Dakotas for a two-week tour of North and South Dakota. During that time they appeared twelve times before at least 1,800 people. After returning home their ministry continued to grow, making as many as four appearances per week in Louisiana and Texas. They returned to South Dakota in September for the Cheyenne River Sioux Indian Reservation Fair. This brought them a rich experience spending time with and hearing the testimony of the Tribal President. Then in October they were in Nebraska for a week and on the way home there was time for a demonstration in Tennessee. In between these trips they continue to minister in Louisiana and Texas.

Throughout this ministry God has blessed and provided. When Paul's voice was fading from overuse God sent the first gift, a sound system with cordless mike. Next, money was provided for a video camera and tape transfer machine. Now the ministry can be shared worldwide, by tape. For a small donation you can receive a VHS videotape of one of the demonstrations given during the past year. The gift that truly allows the Wild Horse Ministry to go "anywhere we're invited" is the portable "round pen" and a fifth-wheel trailer.

Paul does not "break horses", he "gentles" them, with words and pats, until they let him bridle, saddle and ride them - all within two hours. Occasionally, Paul can get the horse to totally submit by lying down. Paul says the Lord has given him this ability and is using him to reach people who shy away from organized religion and church. As the horse submits to Paul's ministrations, people submit to God's. "We have witnessed individual lives being changed because of their willingness to submit to Jesus Christ", says Paul.

Today the Wild Horse Ministries Team consists of many volunteer and full-time members. Paul and Joanna Daily with their two teenage children, Lenora and Dan, can be seen providing the demonstrations. Other team members including family and friends assist in various aspects of the ministry.

Wild Horse Ministries is a non-profit organization and all donations are tax deductible. If you would like to sponsor a demonstration you must provide PRAYER, an area of sand or tilled earth sufficient to erect the "round pen" and an untamed but rope/halter broke colt two to three years old. For information about how to contact the ministry go to         Contact Us.